Dinosaur Train Day Has a Lasting Impact in Iowa 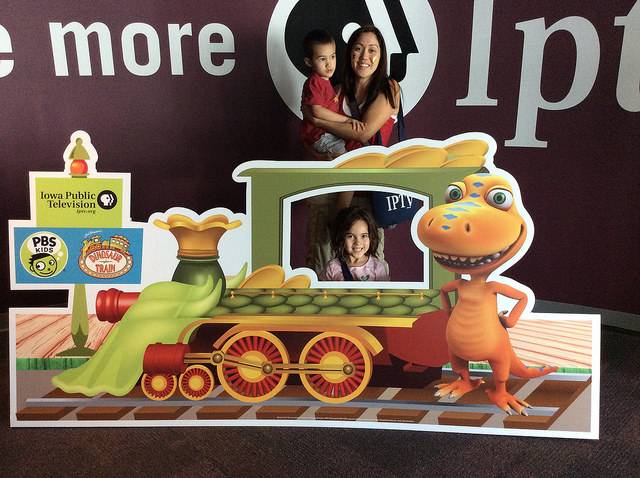 As part of Autism Awareness Month, Iowa Public Television hosted a Dinosaur Train Day for local families. The event aimed to raise awareness for autism, as well as to provide resources and support for those underserved families for whom autism is a part of their lives. Notably, the event also helped several parents in attendance connect to special services provided by community partners. Other families appreciated the hands-on activities designed for children with autism, as it allowed their children to be accepted as they are.

Held at the station, Dinosaur Train Day was hosted by local KIDS Clubhouse personalities Dan Wardell and Abby Brown, who introduced the sensory-sensitive screening of DINOSAUR TRAIN’S "Junior Conductors Academy" episode and encouraged children to sing, dance or move around.

After the screening, families were able to visit community partners’ information booths in the lobby area and participate in different hands-on, sensory-sensitive activities set up throughout the building. From fossil creation to a pteranodon (paper airplane) toss and more, local children “dug” right in:

Participation by community partners—including the Autism Society of Iowa, Regional Autism Assistance Program-Child Health Specialty Clinics, ASK Resource Center, Heartland Area Education Agency, Drake University Special Education Department and ChildServe -- and the opportunity for relationship building/networking increased the impact of the event. In addition to providing a safe environment for local children with autism and providing resources for local families seeking assistance, the event attracted a cross-section of local families from diverse backgrounds and communities – including race, ethnicity, socioeconomic status, residence, and children’s abilities. Comments and anecdotes like the following were typical, and speak to the event’s lasting impact:

“My four-year-old son has autism, and he’s not often welcome at events like these. I can’t believe you’re doing something like this.” –local parent

A boy with severe autism climbed on top of the KIDS Clubhouse set’s desk during a tour and sat quietly as the program host, Dan Wardell, gave a presentation to attendees. His father was amazed at seeing how engaged his son was in listening to Dan. After the tour the boy hugged Dan – which also surprised the father.