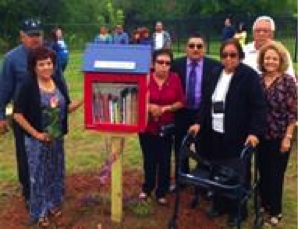 The Jimenez family dedicates a library in honor of their brother.
Courtesy KLRN

KLRN has found an especially meaningful way to further its PBS KIDS commitment to early education -- and literacy in particular -- within San Antonio’s South Side community. Part of the station’s Veterans Voices initiative, KLRN’s Operation Never Ending Stories project has at once given voice to fallen veterans, and increased access to books and literacy resources for local at-risk families.

Little Free Libraries offer free books housed in small containers—usually resembling a large bird house— to members of the local community. For the five Little Free Libraries built as part of Operation Never Ending Stories, volunteers, Goodwill Industries and Half Price Books (a regional book store) donated books to stock the libraries. In keeping with the KLRN and PBS KIDS educational mission to serve local families, 90% of these books were children’s books specifically. The libraries are cared for by stewards (community volunteers, students, and partnering staff), who stock the libraries and maintain them.

KLRN produced five short films to honor six service members. Using QR code technology, people can scan the code and hear the stories of the fallen when they come to borrow or exchange a book. A playlist is also available on KLRN’s YouTube channel. KLRN also encourages visitors to show their support by taking a picture with their book and sharing and tagging it with #OpNES. KLRN’s five Little Free Library locations are also viewable on the world map.

The benefits to the community of KLRN’s Operation Never Ending Stories initiative are many, including providing a meaningful storytelling opportunity for family members to remember fallen loved ones, and offering a way for the community to remember and acknowledge the sacrifice of local service members and their families.

Perhaps most significantly, in terms of KLRN’s PBS KIDS commitment to early childhood education, and literacy specifically, Operation Never Ending Stories provides access to books for families on San Antonio’s South Side, where the last book store closed in 2009, and where third grade reading levels have dropped significantly in recent years. There is a strong correlation between the home libraries and students’ improved academic performance.

Since the start of the project in May 2015, over 6,000 books (90% children’s) have been distributed to local families through the Little Free Libraries affiliated with KLRN and Operation Never Ending Stories.