Last Updated by Anna McDonald on behalf of Tammy Swift on 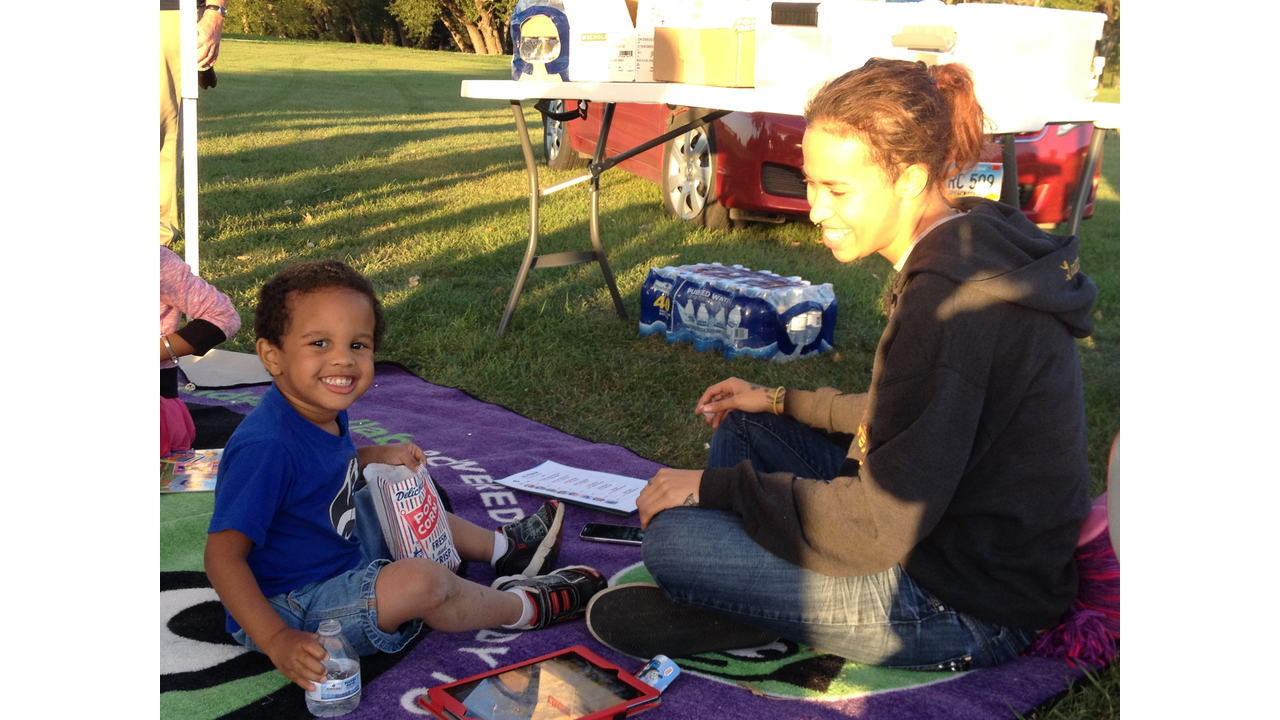 One of the challenges we’ve found when holding community outreach events is that the population we'd most like to reach doesn't always have the transportation, resources or time to get there.

So Prairie Public Education Services in Fargo has begun staging “Pop Up with Prairie Public” events – spontaneous “happenings” in which we suddenly show up in targeted neighborhoods instead of expecting them to come to us.

We approach it like any pop-up store or restaurant – unexpectedly appearing in a local park with our PBS KIDS character-bedecked van (always a big draw), tent, free books, mobile lab, free learning apps, kids’ freebies and free popcorn in hopes that news of our arrival will spread by word of mouth.

Our first event was held July 30 in a West Fargo park, located in a neighborhood with a predominantly immigrant population.

We had no idea what to expect. What if we held a “Pop Up,” and nobody came?

It turned out to be a huge hit. Groups of kids came from every direction; some stayed the whole evening. Parents showed up too. Hesitant at first, the adults warmed up when they realized we were handing out learning tools and books – and it all was free. One little girl who spoke limited English exclaimed afterward, "This was such a fun night!"

We conservatively estimated that 100 kids and 25 parents attended – more than we could have hoped for. The evening was so successful that we decided to hold a second one in Fargo Sept. 29.

We learned enough lessons from our first pop-up to plan the second one more seamlessly. However, there will always be room for more fine-tuning and learning.

Among the things we’ve learned:

·       Plan, plan, plan. It takes a lot of planning to be “spontaneous.” Remember to get permission from the venue beforehand, even if it’s in a public place like a park. (You’d be surprised how many regulations there can be – from whether you can use tent stakes to where you will drive in the park.)  Plan a nearby rain venue (or alternate date). And scope out the site beforehand so you can find the most suitable place for visibility, accessibility and convenience.

·       Include a costume character. If possible, incorporate a PBS KIDS character, as this is a huge draw.

·       Stay safe. As our second Pop Up was in a higher-crime neighborhood, our department manager contacted the police station in case they wanted to patrol the area a little more closely that evening. This turned out to be a good thing, as several officers stopped by and visited with neighborhood residents. It was excellent public relations for all involved.

·       Keep an eye on your mobile devices. We were a little overwhelmed by the brisk turnout for our first pop-up, which means one of the Kindles in our lab managed to walk away. The second time around, we developed a system in which kids had to give their names to “check out” devices, which worked much better. (Oh, and don’t forget to activate the “Find my iPad” feature on your tablets.)

·       Expect higher turnout in the summer. We believe our summer pop-up was better attended than our fall one because there are so many other activities to attend once school starts. We also scheduled the event on an evening when it wouldn’t compete directly with other large school activities.

·       Promote right before the event. Word of mouth is great, but you still will have to do some last-minute promotion. On the morning of the pop-up, we canvassed the neighborhood to post quarter-page fliers on people’s doors and to leave stacks of fliers at places like the neighborhood market, childcare centers and the WIC office. We also promoted on social media the day of the event. In the future, we would like to invite our TV and radio departments to come on out and feature us as well.

Our department will continue staging pop-ups as long as we have the time and resources to do them. We believe they are an important part of our community outreach – and they help us connect and build relationships with the families who need us most.
Blog post by Tammy Swift, Education Services Associate,
Prairie Public Broadcasting