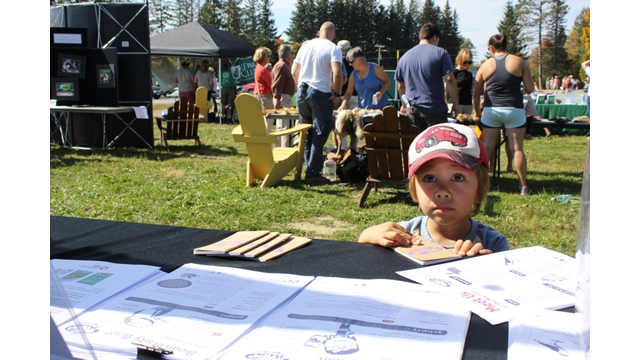 PBS KIDS’ PLUM LANDING is a STEM-based digital project that uses hands-on science activities, digital badging, an iPhone photo app, animated webisodes, videos, and online games, to help connect 6- to 9-year-olds to nature and get them pumped up about their role as caretakers of the planet. Moving between digital platforms and the natural world, kids are offered multiple opportunities for STEM learning as part of the content and curriculum.

As we look towards Earth Day 2015, below are two specific, replicable ways local stations are successfully leveraging PLUM LANDING digital resources to engage families in local events and activities.

Vermont PBS sponsored a PLUM LANDING Family Hike of Breadloaf Mountain, which was part of the station’s celebration of the 50th Anniversary of the Wilderness Act. Over 300 people attended the event, where families explored PLUM content at a designated activity station. Families also used PLUM LANDING branded field notebooks and a PLUM Photo Hunt app to document their hike, and shared their findings with the citizen science site inaturalist.org, as well as with Vermont PBS’ social media outlets.  Vermont PBS promoted their engagement campaign across platforms –on-air and online – encouraged its educational partners, such as the Vermont Agency of Education, the Vermont Superintendents Association, and the Vermont Principals Association to share PLUM LANDING resources with their networks.

WYES joined up with their long-term charter school partner, The Young Audiences Charter School and introduced over 200 second graders to PLUM’s digital and hands-on resources. Biodiversity Bingo proved to be the most popular activity with the students and staff. WYES also sponsored a family field trip to Jean Lafitte National Park, where students explored nature trails, wetlands, and waterways, learning about native plants and animals with a park ranger. Families were encouraged to use the PLUM Photo Hunt app to document the field trip and to share these photos via their social media channels.

WYES also partnered with the Liberty City After School program in New Orleans. Having recently received grant money to purchase new computers, they were excited to incorporate PLUM LANDING’s digital STEM curriculum into their program to enhance their science and math components. The program is still on-going and will culminate with a field trip to Xavier University, where kids will explore PLUM LANDING activities with college student volunteers.

One of the most significant challenges faced by the WYES was in reaching a highly underserved community in New Orleans. Many of these families have limited access to green spaces in their neighborhoods. Simply finding time to spend together as a family can be challenging, and accessing a local park or green space can be even more challenging. To address some of these issues, WYES hosted a series of workshops, where they shared PLUM LANDING’s family activities with parents. The PLUM LANDING “Get Outdoors With Your Family and Sneak in Some Science, Too” tip sheet was a particularly helpful resource for families, enabling them to connect with nature and STEM learning opportunities in their own backyards.

WYES Outreach Manager Monica Turner shares, “We succeeded in helping our families realize that there was no need to make a special trip to enjoy their natural surroundings. We emphasized letting your child take the lead. Just tuning in to the child's observations, while walking and talking about the clouds, the seasons, the rain or bugs, and flowers.”