Celebrating 12 Years, WJCT’s Sweater Drive Convenes the Community to Give Back 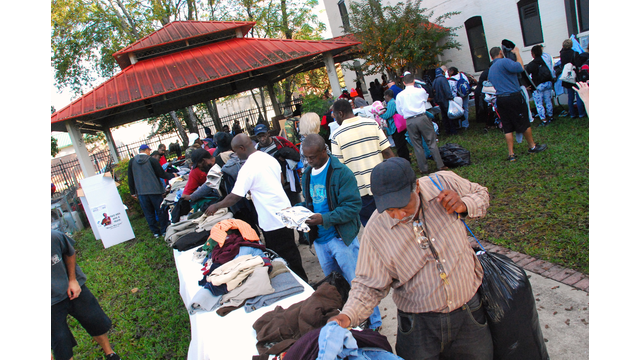 What started as a small sweater drive to honor a PBS icon has for WJCT/Jacksonville evolved into an extensive community collaboration to build awareness and meet the immediate needs of the city’s increasing homeless population. Begun in 2002, the WJCT Mister Rogers Sweater Drive brings together local nonprofits, businesses and schools to facilitate a large-scale clothing drive around Thanksgiving. The annual effort helps Jacksonville citizens to give back to those most in need in the community, thereby increasing the quality of life for all.

A local credit union and moving company provide financial and logistical support related to dropping off and picking up donated items. Local nonprofits provide the infrastructure for distributing clothes to the homeless, which in Jacksonville represent 2% of the total population, approximately double the national average. Local schools are also involved, with a program that rewards students for donating the most clothes. WJCT uses its on-air, online and other communications platforms to document and promote the drive, as well as to provide positive and broad exposure for participating nonprofits and business partners.

Over time, the number of items donated grew from 1,500 the first year to over 15,000 last year, and more than 2,500 homeless people now benefit directly from the drive. School participation has increased to 20 to 25 annually. Notably, with the increase in school participation has come an increase in the number of low-income children taking part in the donation effort, teaching all children the value of giving back to the community as a whole. Thanks to the efforts of WJCT staff members, the Mister Rogers Sweater Drive has also grown and diversified its funders and partners over the years, positioning the project for expanded impact in neighboring counties. As Terry West, President/CEO for VyStar Credit Union explains:

“Mister Rogers Sweater Drive is an important and integral part of our longstanding and ongoing efforts to provide support for the less fortunate members of our community.   As we’ve done for many years, we have made our growing branch network a convenient place for people to donate clothing to people in need.  We urge everyone to help out by stopping by a VyStar branch and donating sweaters, coats and other gently used clothing to help make the First Coast a better place to live.”